Our weanlings: Timber, Percy, and Summit are coming along nicely.  They are about 8 months old now and are looking great!  I can’t wait for Spring and Summer to roll in so that I can turn them out to the main pastures.  Timber and Percy will go in with Nicky and Summit with all the other ladies.  We are enjoying watching these llamas growing strong and big during these winter months and we look forward to a wonderful year of llama packing and training. 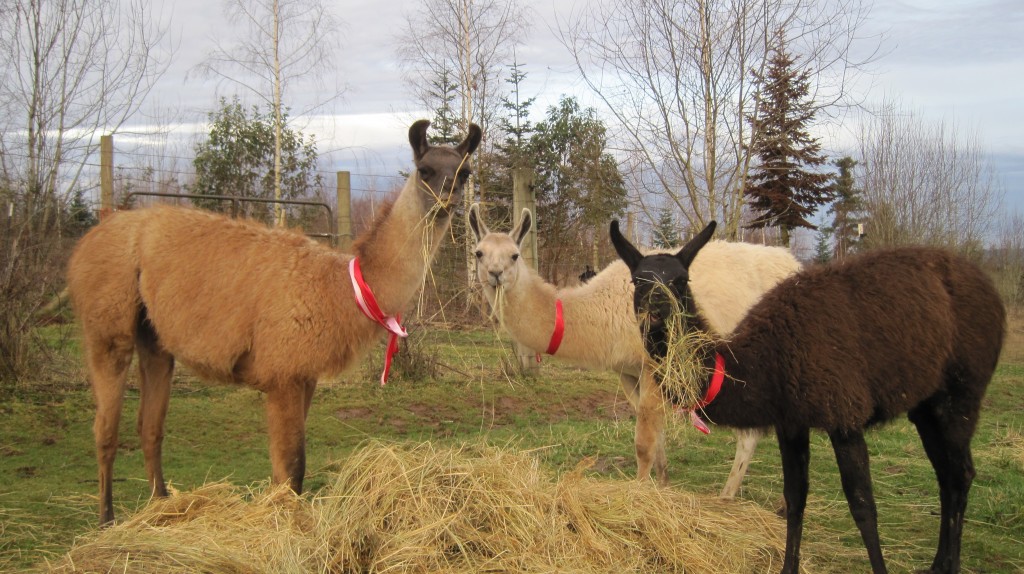 Apollo has been Llama Walker Llama’s stud for two years.  He has sired 4 cria in the time that we’ve had him with our herd.  But, it is now time for Apollo to move on to a new owner and a new family.  Apollo will become part of the male pack team put together by Scott and Maricella Hall.  Congratulations Scott and Maricella!   We hope you find Apollo to be a great addition to your pack team and a worthy trail performer. 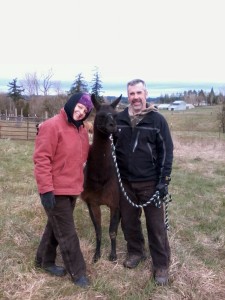 Posted on February 1, 2011 by llamawalker

We are in the middle of our rainy season here in the Pacific Northwest.  The days are cloudy or rainy and the ground is saturated. The temperatures have been mild for the winter, but we have been getting a lot of rain fall.

I’ve been feeding heavily with hay for all the llamas and Mazuri llama feed for the growing llamas.  I have also given all the growing llamas a booster injection of vitamin A and D.  In these environs we have to give the llamas extra vitamin suppliments of this kind, or we run the risk of llamas getting rickets.  Just not enough sunlight here.

I have also had a mild problem with lice.  The vet said it’s going around.  I gave all my llamas the proper dosage of Invermectin pour on medicine.  You pour the metered dose down the middle of their back and it’s supposed to kill the lice.  I’ll see how they are doing in a couple of weeks.  I only noticed the lice on a few llamas, but you have to do all of them that are in contact with each other, since the likelihood of the lice spreading to all of them is high.  Even if you don’t see them on the llamas.  It’s either isolation or total warfare treatment.